Your Story,
My Story

Your Story, My Story

“Connie Palmen’s Your Story, My Story is a lacerating portrait of passion and genius, both of which are gifts that can arrive with mortality hidden in their folds.  It does what only a novel can do—probes beneath the “official” story to get to the dark and mysterious heart of the matter.  It’s a remarkable book.“

From the award-winning author of The Friendship comes a shattering, brilliantly inventive novel based on the volatile true love story of literary icons Sylvia Plath and Ted Hughes.

In 1963 Sylvia Plath took her own life in her London flat. Her death was the culmination of a brief, brilliant life lived in the shadow of clinical depression—a condition exacerbated by her tempestuous relationship with mercurial poet Ted Hughes. The ensuing years saw Plath rise to martyr status while Hughes was cast as the cause of her suicide, his infidelity at the heart of her demise.

For decades, Hughes never bore witness to the truth of their marriage—one buried beneath a mudslide of apocryphal stories, gossip, sensationalism, and myth. Until now.

In this mesmerizing fictional work, Connie Palmen tells his side of the story, previously untold, delivered in Ted Hughes’s own uncompromising voice. A brutal and lyrical confessional, Your Story, My Story paints an indelible picture of their seven-year relationship—the soaring highs and profound lows of star-crossed soul mates bedeviled by their personal demons. It will forever change the way we think about these two literary icons.

“This enthralling novel from Palmen (The Friendship) digs into the tumultuous marriage of Ted Hughes and Sylvia Plath from Hughes’s point of view. After Hughes and Plath meet in 1956 Cambridge, England, the two are instantly besotted. For Hughes, who uses nature and myth as inspiration for his poems, Plath’s reliance on autobiography for her own writing bemuses and intrigues. While Hughes is aware of Plath’s past suicide attempt and mental health struggles, his admiration for her literary brilliance and his conception of their love as star-crossed and destined convinces him to marry her just four months later. Palmen depicts a passionate yet obsessive marriage over the following seven years, in which Plath’s bouts of depression and constant need for Hughes’s emotional attention and physical presence lead to moments of jealous rage—as when she discovers Hughes talking to a female student or being interviewed by a female radio producer. Hughes’s eventual affair is portrayed as almost inevitable, and Plath’s subsequent suicide as the tragic demise of a deeply troubled genius who developed a fixation on death. Palmen’s prose is beautiful and neither condemns nor exculpates Hughes. Palmen took on a tall order with this one, and does an admirable job of delivering.” (Jan.)

“Dutch novelist Palmen (The Laws; The Friendship) brilliantly gives voice to Ted Hughes to recount the tumultuous love story of two literary icons: one known as a martyr, the other blamed as her murderer. After their first meeting, Hughes falls quickly for the witty Sylvia Plath, and their relationship blossoms with passion, poetry, and love. They wed after four months together and aim to live a poetic lifestyle. In the beginning of their marriage, blinded by love and the beauty of symbolism, Hughes doesn’t question Plath’s carefree attitude and her fascination with experiencing an exhilarating life on the brink of death. But as they move forward with literary success, children, and loss, Hughes witnesses the deep struggles, demons, and depression that Plath keeps hidden from the world and herself behind beautiful poetry and a cheerful facade that ultimately lead to her destruction. Palmen brings incredible emotion and life to these two
renowned poets and embodies Hughes fully. This confessional will challenge readers to see Ted Hughes and his story in a different light.”

“Your Story, My Story is dark and at every moment filled with irony as Palmen tells the story through Hughes’ hindsight, depicting instances of their life together when it seemed their destiny had already been marked […] Your Story, My Story will hopefully enlighten fans on both sides of the tragic tale, bringing some much-needed balance to a story which for decades has been told mainly from just one side.”

“This is a short novel, nearly a novella, but don’t be fooled into thinking this will be a speedy read. I took an extra day with it than I had intended because the prose is so infused with poetic insight, that I often found myself pausing to ponder before reading those beautifully composed sentences once again.”

With the outcome known from the start, it’s the path we follow to get there that makes this beautifully written ode to Ted Hughes and Sylvia Plath so engrossing and emotional: a love story of euphoric joy and acute sorrow. Filled with literary references and written like a daily journal, its private intimacy is like being inside Hughes’s head, with all notion of a story, written and translated by strangers, forgotten. 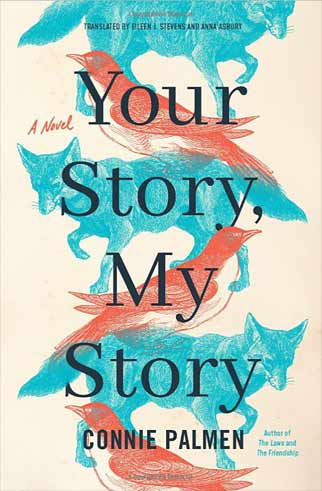 Asymptote in conversation with Connie Palmen 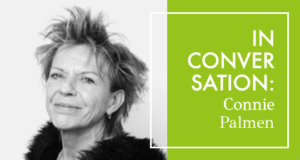